It's crazy to think about, even now. A sitting President incited a mob of domestic terrorists to attack Congress and stop his successor's election results from being counted. That is insane.

THIS IS AMERICA.  This happened here. I've been wrapping my head around it.

In this blog entry, I'm going to go back to Jan 6 through today and think through my reactions.

My first thought was that someone broke into the Capitol and waved a Confederate flag around. Like, the flag of treason to the USA waved proudly in one of the most sacred halls of our nation.

Mike Pence did the right thing--that day. I won't say he isn't complicit in the 4 years of Trump's failed presidency, but on that day, Mike Pence became the de facto President. He was the one that summoned the national guard, he certified Biden's win (and his own loss). People will remember him better for this day.

Vice President Pence came back, along with Congress, and finished the job of certifying Biden and Harris's wins. I wish he would invoke the 25th. The whole world would be safer.

After most of the chaos and horror was over, Trump posted on twitter a video in which he told the domestic terrorists saying "We love you. You're very special."
He told the terrorists that they are special. What a joke. Trump is not just my President, but he's not a President.
I can't believe how bad the country has gotten under Traitor Trump. I've listed it all out.... but I don't want to do that here. But, deadly pandemic, civil unrest, domestic terrorists, a destroyed economy.... what a failure. 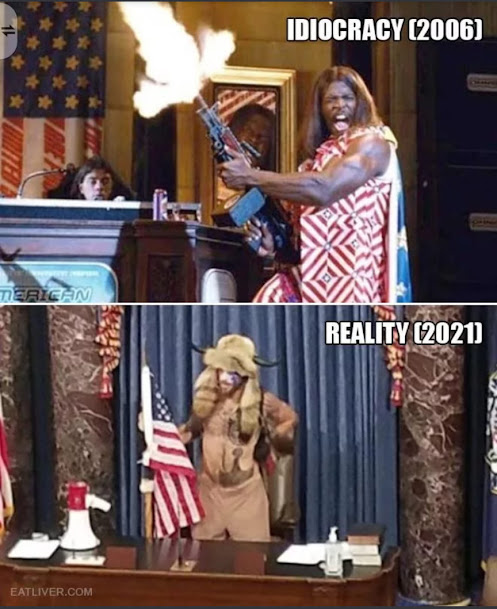 Sad how reality is just as crazy as apocalyptical fiction. Trump got banned from many social media websites days later. Good!

Lots of Trump people began to resign, due to the horrors Trump caused with the deadly coup attempt.

Even Betsy DeVos, the racist Education Secretary who made it a priority that education costs as much and takes from poor neighborhood schools... She was appalled at what the children were seeing happening due to the Trump insurrection.

Voldemort bad for children, says Dolores Umbridge. It's that bad.
Here's my thoughts on the impeachment hearing:

Is there a point to impeaching Trump, when there isn't even time to remove him from office now?
Yes.
Because the leader of the free world should not be able to incite insurrection, endanger democracy, endanger congress, or allow people to die (include police officers), without CONSEQUENCE. Not in America. We don't have kings, here.
AND:
We must set the precedent. What if a Democrat President calls for deadly riots and an attack on the capitol? If we don't impeach Trump today, we've set the precedent that this is acceptable for future Presidents. We must be consistent. Just because a President is leaving in a few days, does not mean they should be allowed to get away with violence, riots, and inciting domestic terrorism.
BUT... UNITY?
Please don't forget that we can just as easily unify against inciting insurrection as we can allowing it to happen without consequence. Republicans are WELCOME to unite with Democrats against allowing a President to attempt a coup and cause a bloody insurrection.
Republican politicians, remember this great quote:
"It takes a great deal of bravery to stand up to our enemies, but just as much to stand up to our friends." - Albus Dumbledore
There won't be healing or unity without justice. We just had a literal deadly coup attempt against our Capitol Building, summoned by a sitting President. America cannot allow this to pass.

I've noticed that many conservative folk, instead of speaking out against the Trump insurrection, have posted more "Back the Blue" images than usual.

You don't "Back The Blue" if you give Trump a pass for inciting the riot at the Capitol that got police officers beat over the head with an American Flag.
Anyway. What a time. In three days Joe Biden will be inaugurated. In three days, the country will start to normalize, I hope! I'm ready for goodness, kindness, and hope to reclaim the spotlight.

........I just can't believe there was a real coup attempt that broke into our Capitol and got people killed.....