Where does Jon Snow go after the ending of Game of Thrones?

This is a short story I wrote that is my idea of what would happen after the ending of the Game Of Thrones TV show.

SPOILERS FOR Game of Thrones BOOKS, PREVIEW CHAPTERS, & SHOW AHEAD!

They guard the realms of men.
Two years had gone by since Jon Snow had gone below for the final time, heading back to the True North with the wildlings. Jon had seen the march to the winter-covered yet strangely charred remains of Craster’s Keep, but then took off his own way, past the ghosts of his brothers still surveying the horizon on the Fist of the First Men.

All my friends are ghosts, now, Jon had thought, his direwolf nuzzling his palm.

The wolf had been Jon’s survival, time and time again. Ghost hunted in the night and left Jon scraps of rabbit, squirrel, and even, on rare occasion, a mountain goat. Jon hadn’t seen a living creature besides Ghost since leaving the wildlings.

“What have I ever done for you?” Jon had said a year ago, petting his wolf. “Got your ear burnt off, nearly killed by wights.” Jon tossed Ghost a juicy chunk of roasted hare.

Jon remembered that time, traveling slowly north of north, with no one talking to him. Since taking the black the first time, day and night people asked hard services from him and lobbed impossible expectations on him. The Halfhand’s mission, Ygritte’s love, defend the Wall, become Lord Stark, become Lord Commander, save the wildlings, save Rickon, retake Winterfell, become King in the North, convince Dany to...

Jon sat in the snow and his wolf sat beside him.

For the last year, he had lived on the side of the mountain in the shape of an arrowhead. No one asked anything of Jon up here. No one pressured him to be a hero or do the right thing. He hunted. He petted his direwolf. He lived free, one of his pack of two.

Jon knew he had become a little more than eccentric. Hopefully not flipping his coin, but the solitude had made him less of a man and more like his wolf. Still, this was all necessary. He had to forget, at least some of it. 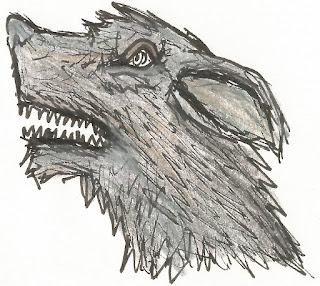 For the first time in two years, Jon spotted a bird, far off in the distance. He coughed, nearly vomiting. An image of his crippled brother, now King of the Six Kingdoms, flashed before him. You were exactly where you were supposed to be. The three-eyed—what was it? Jon had forgotten some things. Bird, a good enough term.

“Bir—bird.” It hurt to use his vocal cords. “Cr-cr-cr-crow. No.” Ghost turned his head, perhaps wondering at his master’s own strange whining. “Raven.”

His king-brother could warg into ravens. Dark wings, dark words. Could it be that Bran had found him all the way up here?

The dark silhouette of a bird grew bigger on the dawn’s blood orange sun. Ghost pattered off into the cave where they had made a home. Jon stood.

This was no raven.

It was Drogon, and the dragon was heading for Jon.

The black winged beast was either bigger than before or Jon was smaller.

The terror landed on the mountain, sending an avalanche of rocks and winter down to the base.

Drogon roared, a sound that quaked the earth and caused icicles to fall off the pine trees, and then it blew fire up the mountain, leaving a streak of black. It shook its armor of coal-black scales, now looking like diamonds as big as shields.

Jon kept his ground. If Drogon wanted vengeance, it had come far enough to find it.

The dragon eyed the man, and Jon’s mind filled with the voice of his queen, though the words were as jumbled as his own after not using them for two years.

I should—I break chains. Breaker of—

Break chains. Bay of dragons.
Jon closed his eyes and saw the Iron Throne melting and reforming, over and over.

And then Jon was no longer on the mountain, but standing before King’s Landing, in a spot he hadn’t ever been.

Grey Worm stood to his left, Tyrion was far down the road, approaching the gates.

Missandei, Daenerys Targaryen’s loyal adviser, was on a wooden deck above the gates, along with Cersei and her guard.

Then her head and body, separately, left the wooden deck and drifted down like fluffy feathers into the dirt.

Drogon roared again, spitting another black path up the side of the mountain, and suddenly Jon Snow remembered where he actually was. But how could I remember Missandei’s execution? I wasn’t there.

“Drogon,” Jon called out. I’m sorry, he thought, though the silliness of apologizing to a dragon nearly made him laugh.

The dragon faced the man again.

The dragon huffed heat at a spot on the mountain and then curled up into it.

Jon took a seat under a pine and fell asleep soon after. He dreamt of a voice chanting, “Remember who you are. The dragons know. Do you?”

Jon Targaryen, he tried the name on.

The dragon was still sleeping. He considered climbing on Drogon’s back. Histories told of dragons with multiple riders. But Jon had killed the beast’s mother.

Midday came, and so did Ghost, returning with a feast. A whole deer. The pine trees up the mountain smoldered still from the dragon’s breath, and so Jon cooked it over the coals. Ghost seemed calmer.

Jon took the larger half of the cooked deer and carried it slowly to the sleeping dragon, but the dragon did not stir. Back when he had ridden Rheagal, he had felt like the dragon understood his thoughts. Drogon only yesterday seemed that way, able to understand him without words. A connection, like the one he had with Ghost.

The dragon didn’t move. Jon dropped the deer in front of the dragon’s mouth.

Ghost patted around him and sniffed at the deer, then went up to the dead dragon and searched. Jon followed along the enormous body, touching the scales, which were almost as dark and glistening as dragonglass now. He found Ghost by the tail, sniffing at something:

Three weeks went by, and another creature arrived on the side of the mountain: Tormund Giantsbane.

Jon could barely use his words, but that was fine. Tormund couldn’t shut up.

“I saw the dragon fly out from the east, over Craster’s Town. Massive, must have eaten a whole fat southerner city. I tracked it, carefully, with a few of my own. Then I saw the arrowhead mountain, the smoldering pine trees...”

On and on Tormund went about how he chased after the dragon until he found Jon.

“Jon, I have bad news. The Night’s Watch has been under siege for a month. My wildlings are helping to defend, only the monsters are on the south of the Wall, this time, trying to get north.”

“No, no, the horse bastards, the Dothraki. They’ve heard you abandoned the Watch to go with us. Dothraki call themselves blood riders, believe they must avenge the dragon queen. They know you broke the treaty made with Grey Worm. Your sister, by the way, withdrew her forces inside the walls of Winterfell, and the horse men rode right past it. They saw the dragon fly by, and followed. They see it as a sign, like a burning comet across the sky.”

“The comet went out,” Jon said, pointing at the dead dragon, now covered in snow. “I’m the dragon now.”

“You’ve got a long shaggy beard, you dragon. Older than what years you have. Beaten down. You need proper food, some of my sweet giant’s milk. Jon Snow’s been asleep on the side of a mountain far too long.” Tormund laughed.

You don’t want to wake the dragon, an unfamiliar voice said in Jon’s mind.

Torumund patted Jon on the back. “If you’re looking to take the iron chair, I think you’ve long missed your shot. Why call yourself by that name two years after the war?”

“The rest of the world knows who I really am, by now. The Spider, Varys, sent a hundred ravens to every city on the continent. If I wear my name like armor then it can never be used to hurt me.”

Jon returned to the Wall, and had the Watch send a force to bring back Drogon’s frozen head. Jon flung it over the side of Castle Black to where the remnants of Daenerys’s forces could see.

With great fear, as somehow rumors of Jon single-handedly killing Drogon spread, it seemed the Dothraki had finally decided that no stallion would ever mount the entire world. Jon offered them peace, with coordination from King Bran and Lord Davos, Master of Ships.

And so, the Dothraki were sailed back to Essos.

Jon, meanwhile, resumed his watch at the Nightfort with a group of the wildlings. Nobody disturbed the Dragonslayer. Jon took a wildling wife, Ghenni, and his three children were born and raised on the Wall, each with a dragon egg in their cradles.

Ten years later, he would meet all of the other lords of Westeros at the Dragon Pit. It was there where Jon’s brother, who would be stepping down from the throne, would tell the full story of Jon Targaryen.

Thanks for reading. If you enjoyed, why not read my idea for what happened at Azkaban next? 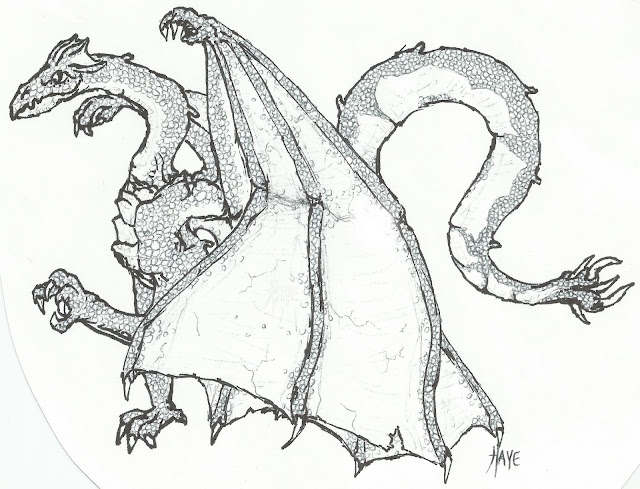 Email ThisBlogThis!Share to TwitterShare to FacebookShare to Pinterest
Labels: a song of ice and fire, drogon, ending, finale, game of thrones, GoT, what happens next, where does jon snow go