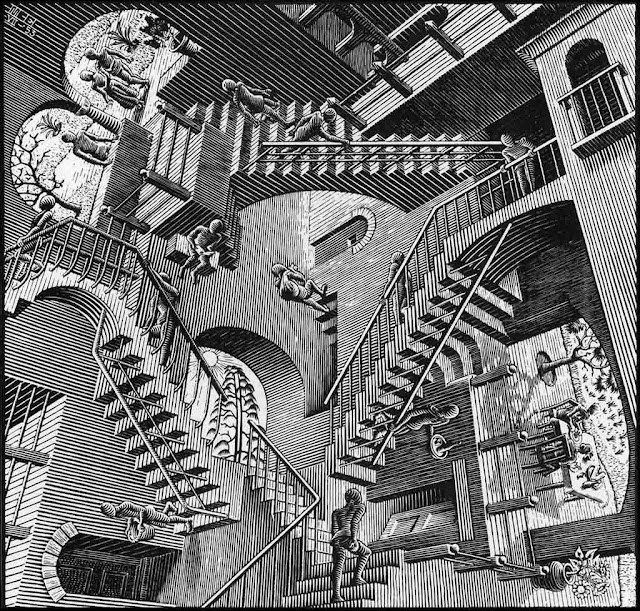 I think Albert Einstein's theory of relativity is one of the most mind-boggling concepts. It has really pushed by brain for the fiction concepts I've been working on.

I'll start this out by saying, I'm no scientist (or mathematician or physicist...), so I might get some things wrong (feel free to point errors out to me). I also have a simplistic concept of relativity stored in my brain, which is warped by the artistic abstractions and imaginative modifications I come up with.... so... This writing isn't about balancing any equations or being spot on. Most of my research comes from a read of A Brief History Of Time and also Google searches.

Concepts I found on the Internet: 1. The basic idea is that instead of being an invisible force that attracts objects to one another, gravity is a curving of space. The more massive an object, the more it warps the space around it.

2. Gravity has an infinite range, although its effects become weaker as objects are set farther away from each other.

The classic example used to break your brain into understanding relativity is playing a game of ping pong on a moving train. 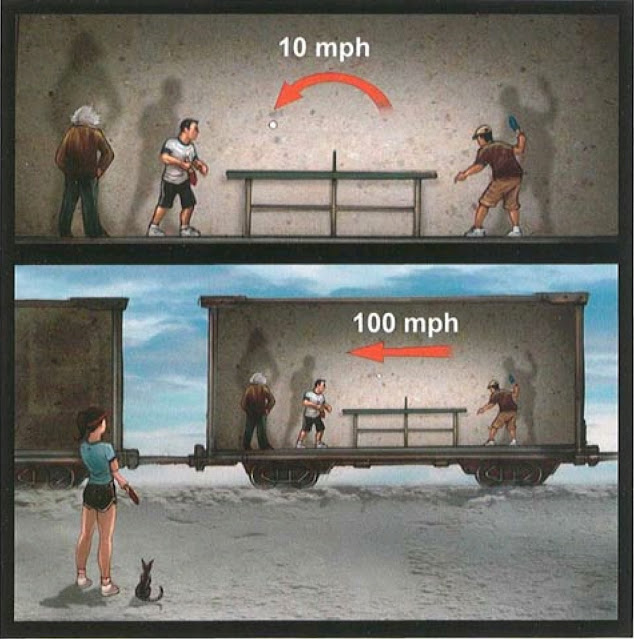 So, if you're watching the game of ping pong from on the moving train, it will look like it's going the normal speed... but in reality, it's going the normal speed plus the speed that the train is moving.
If the train were transparent, and you viewed the game from on the ground, you'd see the ping pong ball going 100 mph and not 10 mph.
I think that's mind boggling in itself.
But then, to think of gravity as not just an attraction of an object to the ground, but a curving of spacetime itself... That gets my mind going. Also, gravity has unlimited range, but weakens as the objects get farther away.

Imagine the sci fi of that. What if a machine could trick the laws of physics into making two objects that are far apart be considered by universal law to be close together? What if you could curve space so that two distance spaces touched? I know a million shows have used wormholes and portals, but the concept is really much deeper if you really think about relativity.
Even the word relativity inspires me creatively. Like, isn't so much of art about relating this and that? Isn't so much of why a character can enchant a reader about the relativity of that character to the universe she/he occupies?
Break relativity down into an artistic abstract for a minute. Think about the relativity of creating a fictional world, but putting something of significance into it, something that affects the gravity of your world/story.
Create a home, in your brain. Create a family. Create where the adults work, where the kids sleep and play nearby. Now, create a dangerous object, hidden somewhere. That danger really curves the space, warps the universe of the story. Who will find the dangerous object? Who will use it? Where did it come from?
Think about the relativity of yourself in your real life. How do you bend/shape/warp/curve the family/friends/coworkers/places/gravity around you?