I just re-read my last entry, and I’d say that the last month has been hard. I’ve just been lonely recently. I’ve been sort of clueless as to what to do besides continue working on my novel.

I’m on a huge upswing right now, though. I decided to take some action and now I have a bunch of plans to go out into the world and do stuff over the next few weeks. I’m making plans for a hike, to go hang out with a bunch of video game nerds, and to go play some tabletop RPGs with a meetup group. I plan on going to a convention that is happening next month. I even updated my OKcupid, haha. Maybe I’ll actually man up and go on a date. 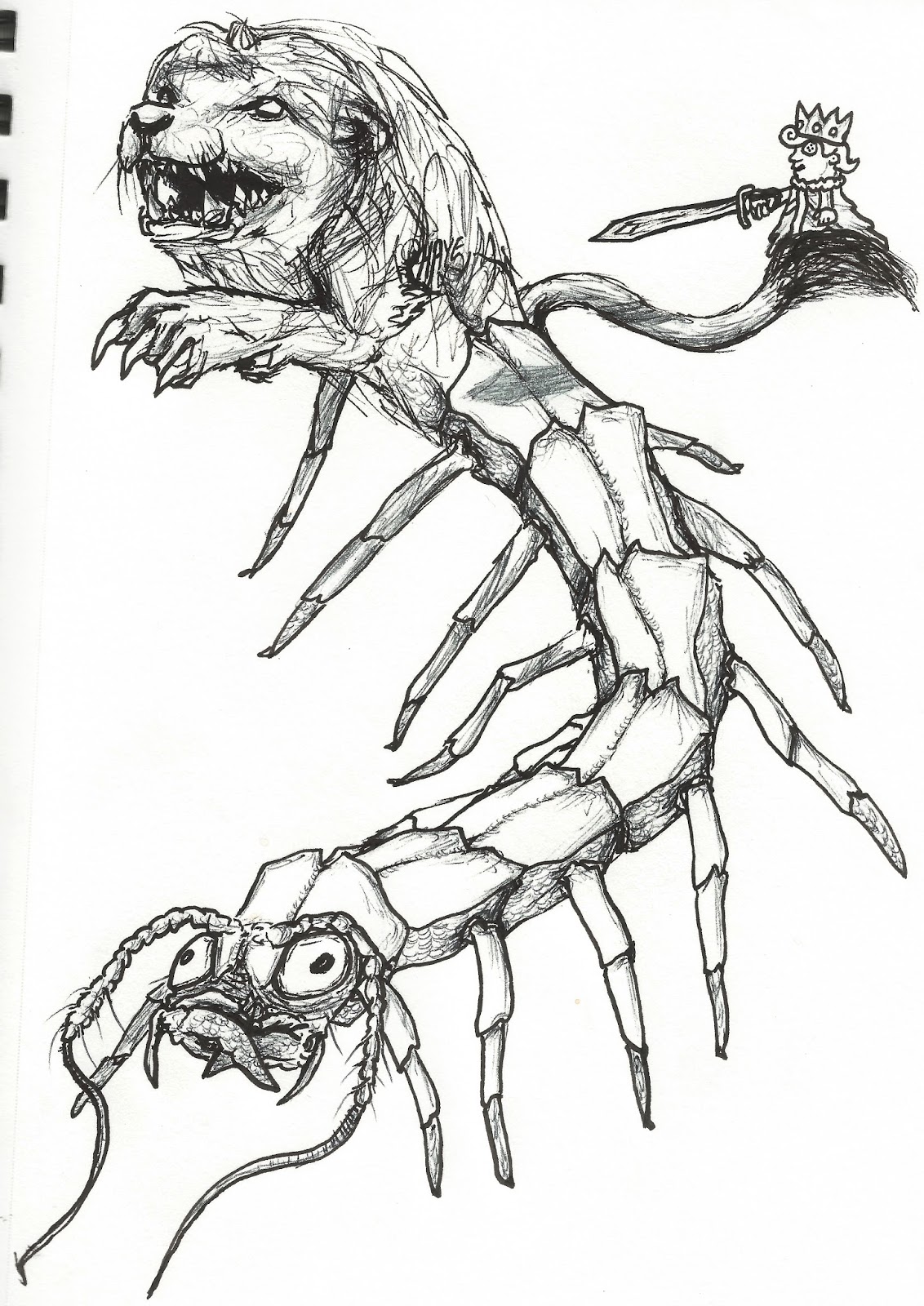 So, that’s the update on that. I’m doing stuff. I've lined up some adventures, and it's changed my mood in positive ways. Life moves on, hopefully gets better, you know, the human experience. It’s Halloween; I’m destined to enjoy myself more than usual. I bought a skeleton, haha. If only I could find someone to go to a haunted house with this year!

In weird dream related news (why is this becoming a thing?), I had a pretty good one the other week and I drew a picture to go with it:
"In my dream, I was tattooing a pretty girl at a state fair.

The tattoo was a centipede with a long body crawling down her back, but at the opposite end of the head was a lion. The last leg of the centipede was the lion’s reaching claw, and the lion’s tail made an S up her shoulder. On the bushy end of the tail was a tiny toy King with a sword reaching out the same direction as the lion’s claw. The woman I was tattooing kept shivering and telling me that my ink was cold.”

I wrote the words above before making the drawing. The brain is a weird place, isn’t it?
Follow me @Oxyborb and check out my website at http://www.harrisonaye.com Thanks for reading!
Posted by oxyborb No comments: Links to this post

Today I completed another major round of editing on my primary writing project, The Unraveler. I’m telling you, it feels good, man. My original goal for having my novel sending-out-to-agents-ready was my birthday (September 25th), but I think I’m going to push that back until spring.
For those who haven’t studied the business of writing/selling fiction books, the basics (for an unpublished writer like me) are like this:

1. Write the book
2. Edit the book to absolute perfection
3. Write a query letter that shows how awesome/marketable your book is
4. Send said query letter to an agent
5-. If the agent rejects you, move on to the next
5+. If the accepts you, then the agent will attempt to sell your book to the various publishers
6. If the publisher accepts, then woo-hoo, you’re going to be published

Step 7 and on is marketing and etc, etc. It might even be the biggest/most complicated part of the whole thing, but that’s not what this blog post is about.

I’m on step 2 & 3, and I’ve been there for a while. I’ve been polishing my book to an insane degree, and I’ve spent more time on the editing than I did on writing the book.

The reason is that you cannot send a query letter about the same book to the same agent twice. So, if my book is littered with problems and grammatical errors, then my ship has sunk if I mail out my query letter too early.

long past the point where my friends & family who have read it have told me that they think it’s already perfect. Honestly, it wasn’t and isn’t, but I can now say that it’s getting close. I might do a few more read-throughs before feeling OK to send it out, but all the major issues my book had have been fixed. I’ve spent years cutting out the fatty, boring parts and enhancing the awesome. I’ve spent so much time just considering plot loopholes and character perspective and all that jazz, but it’s nearly there.

and the rest of my projects

But I want to have a career in writing; not just be a one-book-wonder. So, while I’m editing The Unraveler, I’ve also created a potential series plan, wrote the first 3 chapters of book 2, and I’m ramping up a second book series called Pixelicand planning out a one-off novel (codenamed  Project HIM). I’m also writing a bunch of short stories and poems that I wish to submit to magazines soon. But that’s not all.

I’m working on a marketing plan for myself (so when I do talk to agents/publishers, I won’t feel completely ignorant), a synopsis of my book, a career path (so I can see the direction I want to take), reading books on book selling/writing as an industry, and I’m creating the foundations for a successful social media world. That, and I’m still working on making my query letter explain in so few words why I believe my book will sell.

Oh, yeah, and I have a fulltime job. lol

I haven’t made much time for friends lately, and for that I’m sorry. I’m basically in a mad drive to get my book completed, at this point. Deadlines are insanely important to me, and I don’t want to be working on The Unraveler forever (but I also won’t quit until it’s truly perfect).

I’ve started reading The Unwanteds: Island of Legends and also I’ve begun Stephen King’s The Dark Tower series. Something light and fun and something deep and adult. They are a surprisingly good combination of books to read at once. Oh well, that’s my update.

Thank you to everyone who has and continues to support me in my crazed ambitions. I hope I make it all worthwhile, someday.
Posted by oxyborb No comments: Links to this post

Mass Effect - I beat it, here's what I think: 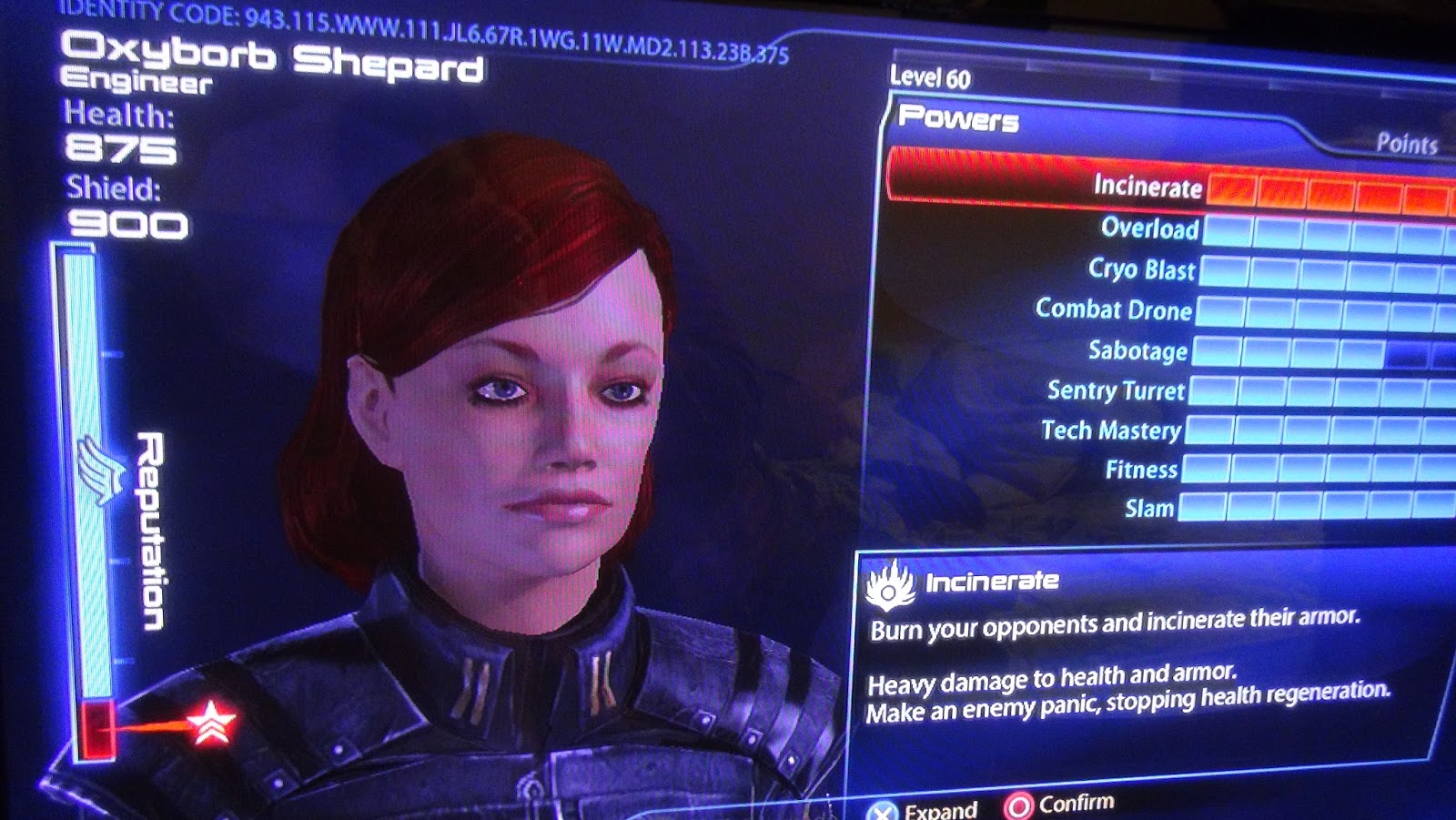 FYI, I only played ME2 and ME3, because ME1 wasn’t out for PS3 when I felt like playing it. So, this is all about the last two games. Also, for ME3, I played Citadel, From Ashes, and Leviathan DLC (I skipped Omega). I played as an Engineer; my most used sidekicks were Liara, Garrus, and Javik. I played on Insanity. I achieved the platinum trophy on ME3, but not 2.

SPOILER WARNING: I am going to litter this with spoilers, so if you haven’t played the game, go play it. That’s all you need to know. Mass Effect is amazing. Go play it immediately.

I loved the worlds. I loved the set pieces. I loved looking out from where my shuttle landed and seeing a grand expanse of terrain. The views were incredible. Whereas most video games place you in a windowless room to fight through so that they don’t have to worry about creating outside visuals, Mass Effect creates large open windows and allows the player to see the world beyond. I loved looking around and admiring the horizon, seeing the battles unfolding far beyond the space that my character can go. The indoor settings were even expansive… seeing the inside of the Geth Dreadnought and the endlessly large tunnels… Incredible.

The graphics were some of the best I’ve seen on the PS3.

On the critical side of the visual spectrum, I will say that Bioware games have always, for me, had a problem with coming to life by way of motion. Whereas in games like Skyrim, the NPCs walk around, sharpen tools, use the log cutter, ride horses, etc… Bioware games, like ME, usually are populated with static NPCs that don’t move much beyond idling animations. I would like to see Bioware work on this, as their worlds are some of the most engaging and immersive ever created, they deserve to have NPCs that feel alive. Why is the same Volgon always in the Embassy when I show up? Why always standing in the same place? Doesn’t he live somewhere? Doesn’t he have other things to do?