The bittersweet emptiness of finishing The Witcher 3

I didn’t just beat the game; I got all the trophies (I played it on PS4). I don’t always aim to Platinum a game, but there are just some games that make me want to become a master of it. I have never played the first two games or read the books, so W3 was my first experience in this world.

Now, my blog is about constructive criticism. I am a creative-type; I love thinking about how to improve games. I don’t usually gloat on and on because that’s boring to read, but I will say this:

The Witcher 3 is awesome storytelling. It takes each character from its huge cast through an individual story, allows you to get to know them, makes you love them, and then brings the entire cast back in the last act for a grand finish. The last act of the game, I kept saying to myself, “I love how all of these characters have come together. I love seeing ________ here.” Even minor characters, like a certain swamp godling, return for the last act. The whole thing gave me the feels. Well crafted dialog, well thought out plot, believable characters. Lore that is rich and rewarding. Monsters that give you the moral choices to allow them to live. The Witcher 3 left me feeling bittersweet about the game's end, because the character-drive writing was so, so good. I wish it could have gone on and on.

Let me also gush on that developer. Wow, kids. You’re really a AAA dev now. I expect a million more games from you. Not only is the storytelling some of the best in gaming ever (right up there beside Mass Effect), but it also might be the absolute most beautiful game graphics I’ve ever seen. It’s stunning. I don’t even know how or why games would ever need to look better than this. Wow. 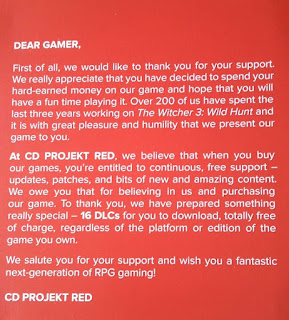 On top of all that, CD Projekt Red made me feel so excited and love-stricken with this dev before I had even popped the disk in the PS4. Just opening the package for this game yielded a helpful story booklet (for people like me who are new to The Witcher), a soundtrack (which is AWESOME, beautiful music), a nice unfolding map of the world (in full color), and a slip of paper with the note in red:

This was really classy. Really classy. I’m not being sarcastic. The dev is saying that they recognize how hard I’ve worked to pay for their game. It makes me feel good inside, to know that they intend to support me as much as I’ve supported them. This small slip of paper is AAA customer service from a AAA dev.

And they lived up to it, with honors. Most companies take ages to patch their games, but The Witcher 3 has been patched several times, and I’ve downloaded tons of free DLC. They listened to criticisms against the game, and they’ve reacted with fixes. I’m just really, really impressed.


Everybody's Gone To The Rapture

Super Smash Bros. for Wii U and 3DS

One Year of Daily Writing (not on this blog) 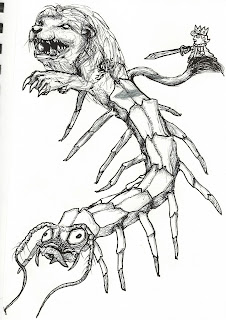 Today I achieved one year of writing down something from my life each day onto a calendar book that I got from a random credit union.
It’s really cool to remember things like my dream about a haunted centipede tattoo or that one guy who dressed up as Colonel Mustard at that Halloween party. I logged sad memories about a college buddy passing away and that day I got hit by a tornado while on Green Mount Road. This past year, I marched in a parade for a congressman, went 37 days without caffeinated beverages (…COFFEE…), saw a musical comedy in Chicago, road tripped to SOHO music fest, and pranked about a million telemarketers (and one very unsuspecting AT&T U-verse door-to-door dude).

Weird to see so much of it bunched up in a paragraph like that.
Posted by oxyborb No comments: Links to this post

My last blog post was partially about kudanites. These are creatures of my own invention, which came from inspiring pictures of seahorses I took. After drawing them last month and also editing chapters in which they are in, I felt so inspired to try my hand at sculpting one out of clay.

Here is the result: 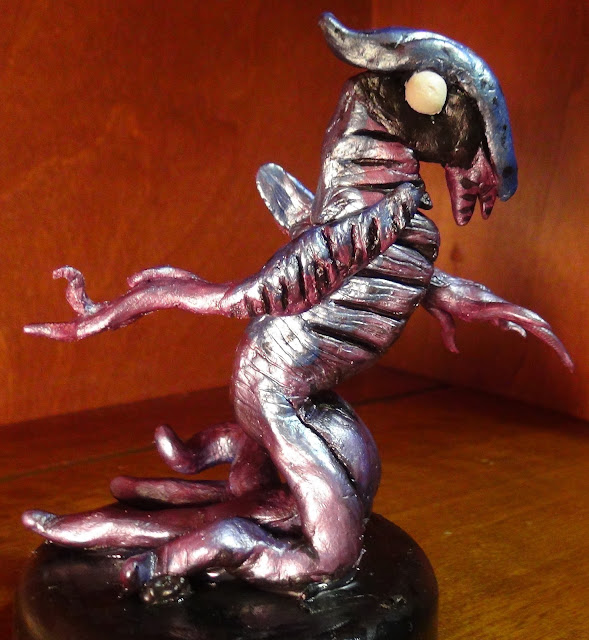 It was modeled after these drawings (which I drew). 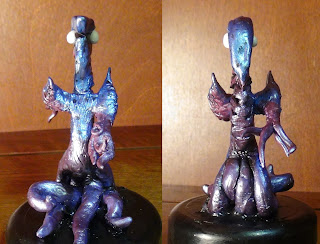 Here it is from the front and back. Weirdly flat. 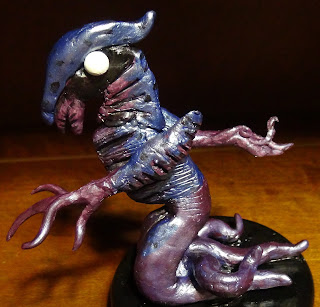 The leg/tentacles were fun to do. The paint is mixed with metallic silver. 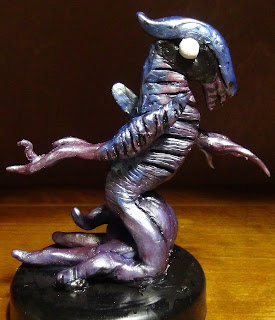 I tried to make a creature unlike anything I've seen in lit before. 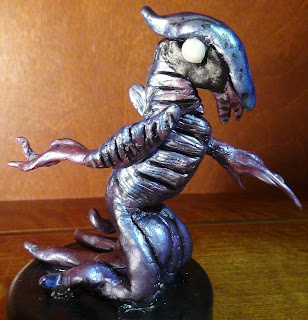 The stand is a mint-container, loaded with rocks.


I have always excelled at art. I love painting, sculpting, writing, song composition... etc. But when I decided to become a writer, I knew I'd need to focus to actually master it. I didn't want to be the doer-of-all, master-of-none. So, I quit most of the other types of art I made. When I get the itch, I try to scratch it within the realm of my writing projects. This was that. I needed to sculpt, so I did something for my book.
Posted by oxyborb No comments: Links to this post 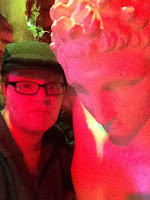 My weekend was wild. Absolutely wild.
So, a week ago I posted on Facebook that I had a week off from my job (I work at a school, on break between summer and spring sessions). One of my old college friends responded. She had the idea to go to the zoo, so we did. It was great, but that’s not the wild part.
I got another response from my buddy, and he wanted to go on a random road trip. I thrive on weirdness and spontaneity, so I said yes. We left two days later (Thursday).
He had a friend in an awesome band called Jetpack Hotline (check’em out!) and we went to their show, in a bar called Original Mother’s. It was a wild show. Beforehand, we had crawled around the city and rode the train. Somehow, we talked with a hundred locals and laughed with them. Everywhere we went we met people randomly.
The next day we drove out to the Navy Pier and then walked around the city. We drank coffee from a few places, and I had AMAZING donuts from a place called Stan’s Donuts. We walked to the Cloud Gate and then to Shedd Aquarium. We took the water taxi from there back to the Pier and finally partied there for awhile.

We stayed the night at a friend from high school’s place and jammed out with his roommates. We went to a Spy Store, and checked out a bunch of weird spy gear you can buy. The next day we did coffee and then visited an old friend who used to run ITP (my old theatre company). We caught up, did a random hike, and talked with his fantastic girlfriend about dinosaur sign language and compared swords…

After that, I met my traveling bud’s college friends at a pub, and we ate lunch (I had brussel sprouts). We then went to a hilarious musical comedy called “Cupid Has A Heart On” and then went out clubbing. We danced until 3am and were brought up to V.I.P.P. status, which was crazy. I don’t even want to write all the crazy things that brought us up there. It was a fantastic night, though.
I finally drove home on Sunday, detouring to a few random small towns, and then went through the hundreds of pictures we took. There are so many things that happened that I don’t want to type out here, but I will say that everything was amazing and random.

It’s just so awesome to have gone on vacation without a single bad thing happening. Nothing went wrong. Heck, even traffic and parking was OK. We did a good mix of touristy and not-so-touristy things. We walked the middle of the city and the neighborhoods in the outer districts. We hiked the waterfront and took a ride on a boat. We ate authentic food and homemade local affairs. We surfed the couches of a different person each night. It was so cool. I will remember this as one of the best experiences of my life.
A big thank you to the awesome people that hosted me and my buddy for the nights we stayed, and also to the roommates (and one friendly dog) who allowed us into your homes. I also want to say how very lucky I feel to have met and interacted with so many new people over the course of the weekend. The bandmates/groupies, the random people at that Irish pub, the girlfriends, the random club bouncers, the college friends, that guy playing Ms. Pac-Man, and everyone else. It was a pleasure.