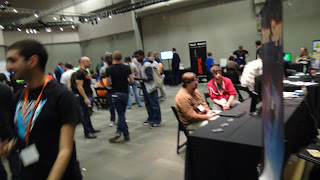 While at Archon, a local sci fi convention, I got a flyer about Pixelpop, which is a smaller video gaming convention. So, of course I went. It was held at the St. Louis Science Center. Although it was small, it was worth going to see, because it was fun. I sat in panels and played gaming demos. I want to highlight here a few of my favorites. 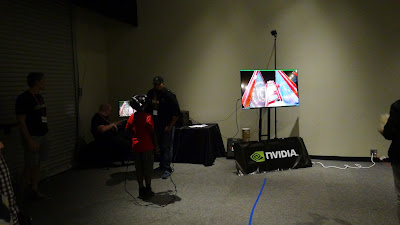 This was my third VR experience ever, my first VR game. Before, I had only watched a dinosaur demo at an AT&T store using a cellphone VR and also I’ve experienced a roller coaster using Google Cardboard. They were… not extremely impressive, to be honest. OK. Not amazing, but cool enough.

Using an HTC Vive headset and controllers, I demoed two minigames within a carnival setting collectively called VR Funhouse. The first game was using swords to pop balloons. It was fun. Cool to have a real VR experience, too! But… let me tell you… the next one I tried did it for me… 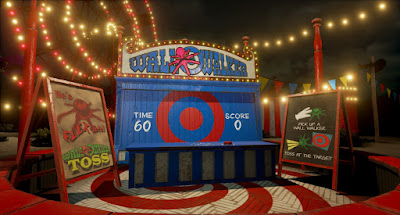 And dumb, but I was legitimately laughing out loud while playing it. Basically, the mini game consists of pressing a button, which drops down a slimy-stretchy octopus toy before you. Using the two controllers as hands, you can grab the octopus and fling it across the room at a target on the wall. It’s like those old stretchy hand toys you get from a quarter machine.

The physics are amazing and hilarious. When you pick one up, it slogs around as you’d expect a real one to. You can shake it like jello and then throw it. SLAP! It sticks where it hits. But you can also use two hands and stretch the rubbery toy out and even sling it like you might a rubber band. Let me tell you, it’s so funny in motion. There’s no way to describe it in text to do it justice, but man… try this one. I was laughing so hard. The mechanics of this stretchy octopus thing should be the center of its own game. I don’t know. Octo-man?

The other game I saw that wowed me was Text Quest (there’s a demo on the site!).

The look of this game feels very much like Minecraft. It’s first-person and the graphics are minimalist. 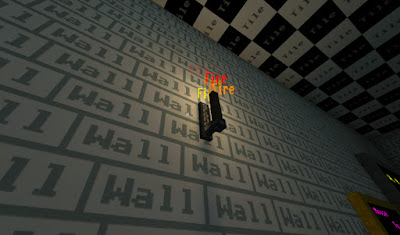 However, instead of blocks, everything is literally text. Fire, for example, will be the word fire pointed upwards and pulsing like flames in orange and red font. Your sword is not a picture of a sword, it is the word sword, pointed out like a sword.
It’s really cool looking. Everything you walk up and touch can be interacted by bringing up your keyboard and typing what you want. So, to go through a door, you type “open door.”
The developer was taking notes on what I typed out while I played. I tried to push the limits and he seemed to enjoy the creative things I typed. Hopefully, when it comes out, the limits of your words will surprise you.
It’s somewhere between Scribblenauts and Minecraft in feel. If the developer releases player-creation tools then this game will be a goldmine, I swear. I would love to make my own adventures and send them to my friends.
No comments:

October has been busy for me. Every weekend has been filled with conventions and festivals of some sort. But, this blog is about writing, and so I’d thought I’d post some of my notes I jotted down when I was sitting in panels/roundtables. The panel I’m going to write about in this post is from an awesome science fiction convention called Archon.

I went to a panel about the best and worst of YA literature. The panel included Cole Gibson, Sarah Jude, Rich Horton, Deborah Millitello, and Rachel Neumeier. Really cool, insightful people to listen to.
I learned that there’s a term for the “Fault in the Stars”-style of cancer-fighting-romance called “sicklit.” I sort of hate that term, because it makes light of very serious illness. The panel members were talking about trends in YA that they’d like to see end. Other bad-trends they decided were dystopian lit, vampires, chosen one archetypes, and stories where the main character has a special power.
Exciting upcoming trends (although they said that trends are almost always unpredictable) include gritty/grounded lit, non-western culture, paranormal, cult books, and a hopeful venture into space operas.

They ended that segment by saying that if you try to write to follow a current trend, you will likely be 2-4 years late by the time your work is published.

1. Just some other random tidbits from the panel. Someone said that diversity is code for race when it comes to publishers.
2. They brought up some literary drama between authors. They said that this author, Tommy Wallach, is known for writing flat/boring non-white characters. They mentioned an article by VE Schwab that tries to pinpoint some of the issues of how a man can think he’s above other people.
3. “I used to have a baby sister” is a great story opener one of them had read before.
4. Novels they suggested we should read include The Accident Season, Ms. Peregrin’s series, Archivist Wasp, and one called something like “Bow Gap” which I don’t think I wrote down correctly.

Overall it was an excellent panel and really recharged me as a writer-wannabe. I will be writing more about other panels I went to in the future. Thanks for reading!