Best-of Me Around the Internet (Part 1)

I do a lot of stuff online that isn’t on this blog, so I thought I’d do a best-of sort of post that highlights some of my favorite art/writings/blogs/videos/etc. that I have up around the net.

First up is from my tumblr, which is dedicated to all the sketches and drawings I do. I felt inspired to draw a preying mantis one day, and I love the way I positioned its limbs. What do you think?

Oxyborb is my gamertag, but I also named my nerd-culture blog it. One of the most popular posts I’ve written was about Super Smash Bros. for 3DS and Wii U. This mega-sized blog has tons of illustrations done by me!

From the Super Smash Bros. for 3DS and Wii U Mega Blog

So, I think Animal Crossing deserves 3 character slots. I think each could be a unique, non-clone character. I think Tom Nook should have a Red skin. Shovel Knight would be an amazing 3rd party addition. Dillon needs to be upgraded from Assist Trophy. Ridley is not too big, so shut up. Skull Kid would be wicked. Impa could be a heavier Sheik. I want the giant blue pig version of Ganon to be a character, separate from Ganondorf. Petey Piranha is still one of my favorite ideas, using tornadoes and slime as attacks. Nintendo needs to purchase every aspect of Super Mario RPG, and then Geno needs to have a new game made starring him (see pun for details) and a spot on the roster. King K. Rool is more interesting than Dixie.
Continue Reading this SMASHING post!


My music at Soundcloud!

I’m also a songwriter. I wrote an album and two of my buddies helped me perform and record it. One of my favorite songs is here for your listening pleasure.

From the My Wild Random Road Trip to Chicago: 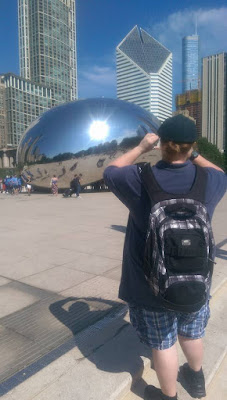 We stayed the night at a friend from high school’s place and jammed out with his roommates. We went to a Spy Store, and checked out a bunch of weird spy gear you can buy. The next day we did coffee and then visited an old friend who used to run ITP (my old theatre company). We caught up, did a random hike, and talked with his fantastic girlfriend about dinosaur sign language and compared swords… After that, I met my traveling bud’s college friends at a pub, and we ate lunch (I had brussel sprouts). We then went to a hilarious musical comedy called “Cupid Has A Heart On” and then went out clubbing. We danced until 3am and were brought up to V.I.P.P. status, which was crazy. I don’t even want to write all the crazy things that brought us up there. It was a fantastic night, though.

Continue reading about this crazy trip!

The Unraveler’s Atlas is a monthly creative experiment I do. Each month, I create a new fantastical beast that I might use (or already have used) in my fiction writing.

The Arbuscula is a sentient tree creature. It has four spiderlike legs and a great maw of a mouth. Some of the leaves are light-sensitive, which give the arbuscula a sense of sight. Arbuscula come in a variety of appearances and several different tree-breeds have been discovered. Although they are very hostile, they will often sit quietly and wait until their enemies leave. Any small-sized prey, however, will be killed if the risk is low enough.

Continue reading about this monster!

My first name is David, but my pen name is Harrison Aye (my middle name). My ultimate goal in life is to become a novelist and create worlds for readers to explore. The Unraveler is the novel I’m focusing on, so this blog is themed after it. But I post other writings on it as well. What I’m sharing here is a short story fan fic set in the Harry Potter universe. While that sounds lame, this is a story I was forced to write because the idea I had was so good that it screamed at me to come out. It’s not like other fan fic, but set in the past with characters well before any of the main book series.

From The King of Azkaban:

“So, why don’t you leave, then?” the ruined man asked. He looked a dementor himself, wearing a ratty black cloak over his striped garb and having a face so sunken it barely existed at all.

“Erik, as I have told you many times before, I have as much left to go to as you do,” Sirius Black responded. “I’m old, hurting.”

Erik coughed and laughed at the same time. “As much as I had, you have now. Azkaban is my home, my doom.”

“Is that why the dementors leave you alone?” Sirius asked. “No, my friend. They leave me alone for the opposite reason that they ignore you.”      “Because I can transform into a dog?”   “Dogs, like yourself, are innocent, subjects to their upbringing.”

“If you’re the opposite of innocent, then you’re guilty. You’re not the only one here who is.” Sirius laughed into his hands.

“No, I’m not, but I hold regret and desire punishment for my crimes, which is the opposite of knowing that you’ve been wrongly accused. I am a ruined man, and I made myself this way. I have no emotions to feed them.”

“What did you do that was so bad?” Sirius asked.

Erik raised a bony white arm and pointed out the narrow slit in the stone.      Sirius did not bother to squint and peer through. Erik meant the dementors. What else could be out there? “What about them?”      “It’s quite the tale.”      “I have time, obviously,” Sirius said, stretching his arms and folding them behind his head. “I’m stuck here, the same as you, Erik.”

“Only I am stuck, and Erik isn’t my name. It’s Ekrizdis, and I’m nearly eight hundred years old.”

And so Ekrizdis told his story, and Sirius listened.

Continue reading about this story...