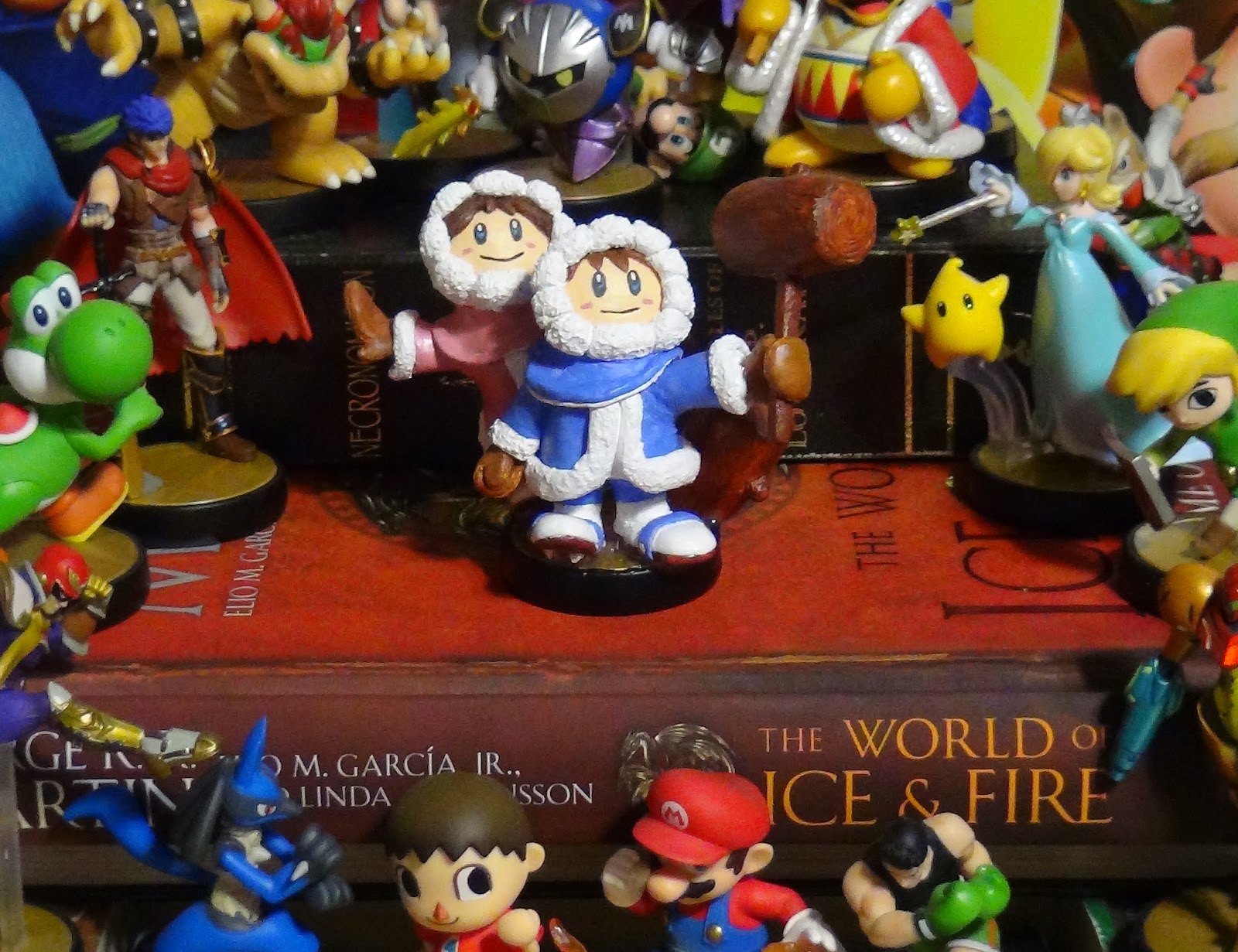 Ice Climbers were cut from Smash Bros., so I knew I'd have to make them to truly complete my amiibo collection.

I tried using the model from the new IC trophy, but I took a few liberties. I made Nana looking the same way as Popo, and I moved her closer so that I could glue them together. Her tiptoes and hammer touch the base. This was for proper support. I also thought Nana should have less fuzz bumps to separate herself from her brother, and both of the hammers are darker than their usual color. Just my preference. 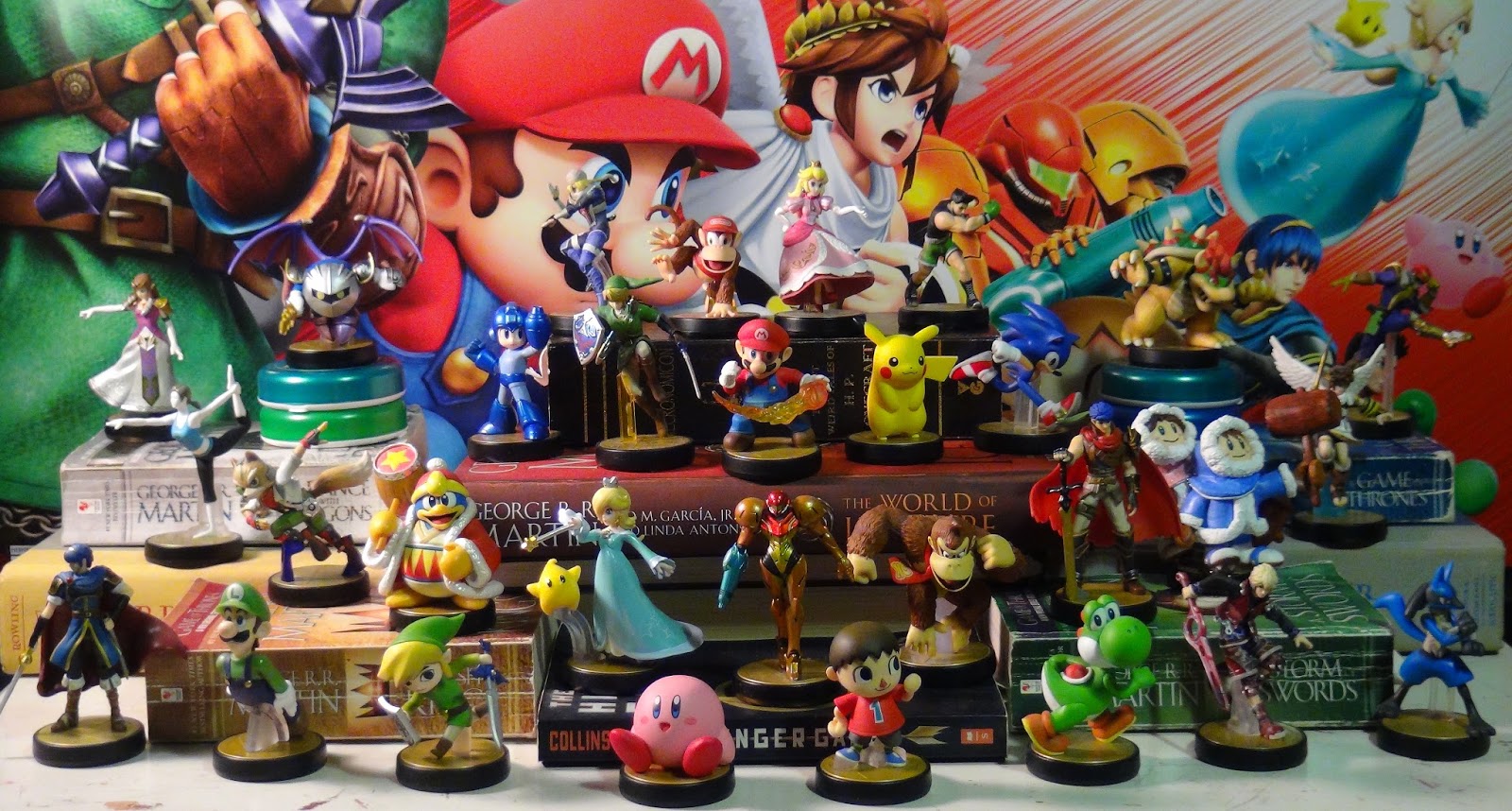 Here's a few insights into how I made them: 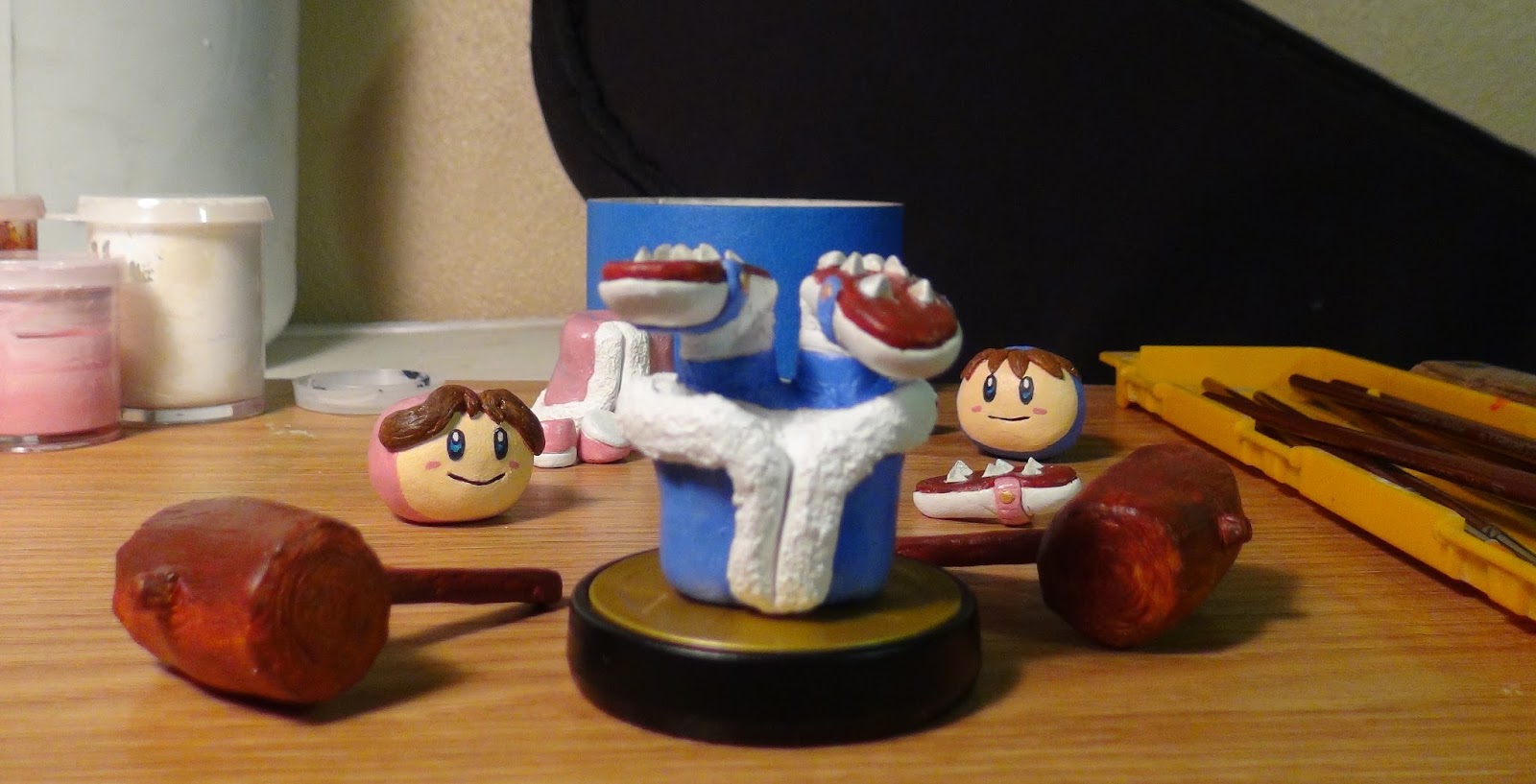 All the spikes on the feet were made separately and glues on. I fluffed the coat by dabbing the clay with soggy clay. 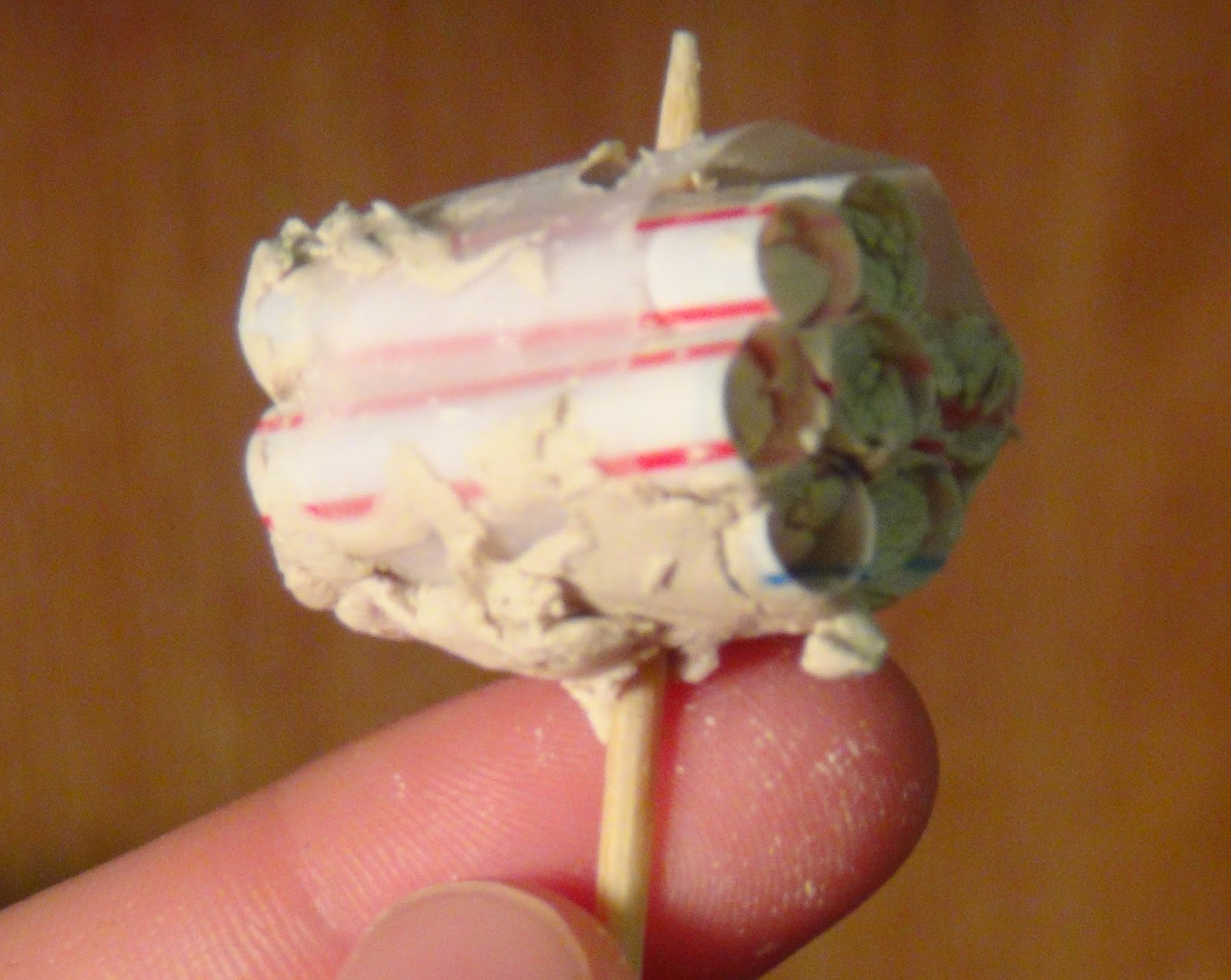 I made the hammers out of hollow straws so that they'd weigh less than heavy clay. They have toothpicks as frames for support. I used another tooth pick to cut textures of woodgrain. 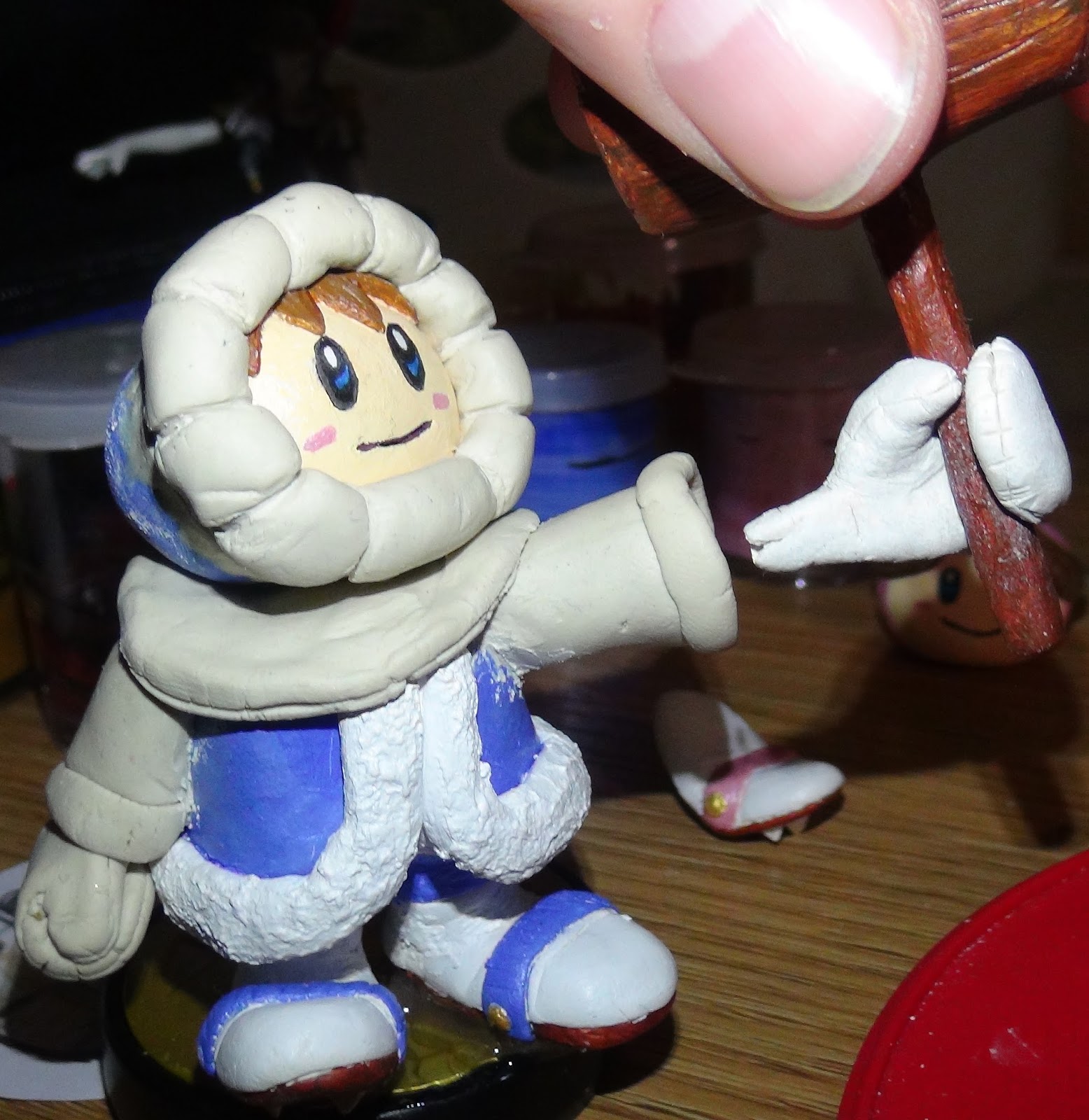 I began with the bodies and heads, and all the limbs came after. The arms I allowed to fully dry before attaching them. Also, I used a sewing needle to make a skeleton for Popo's hammer arm. The gloves have the same sort of sewn texture as Dedede's. 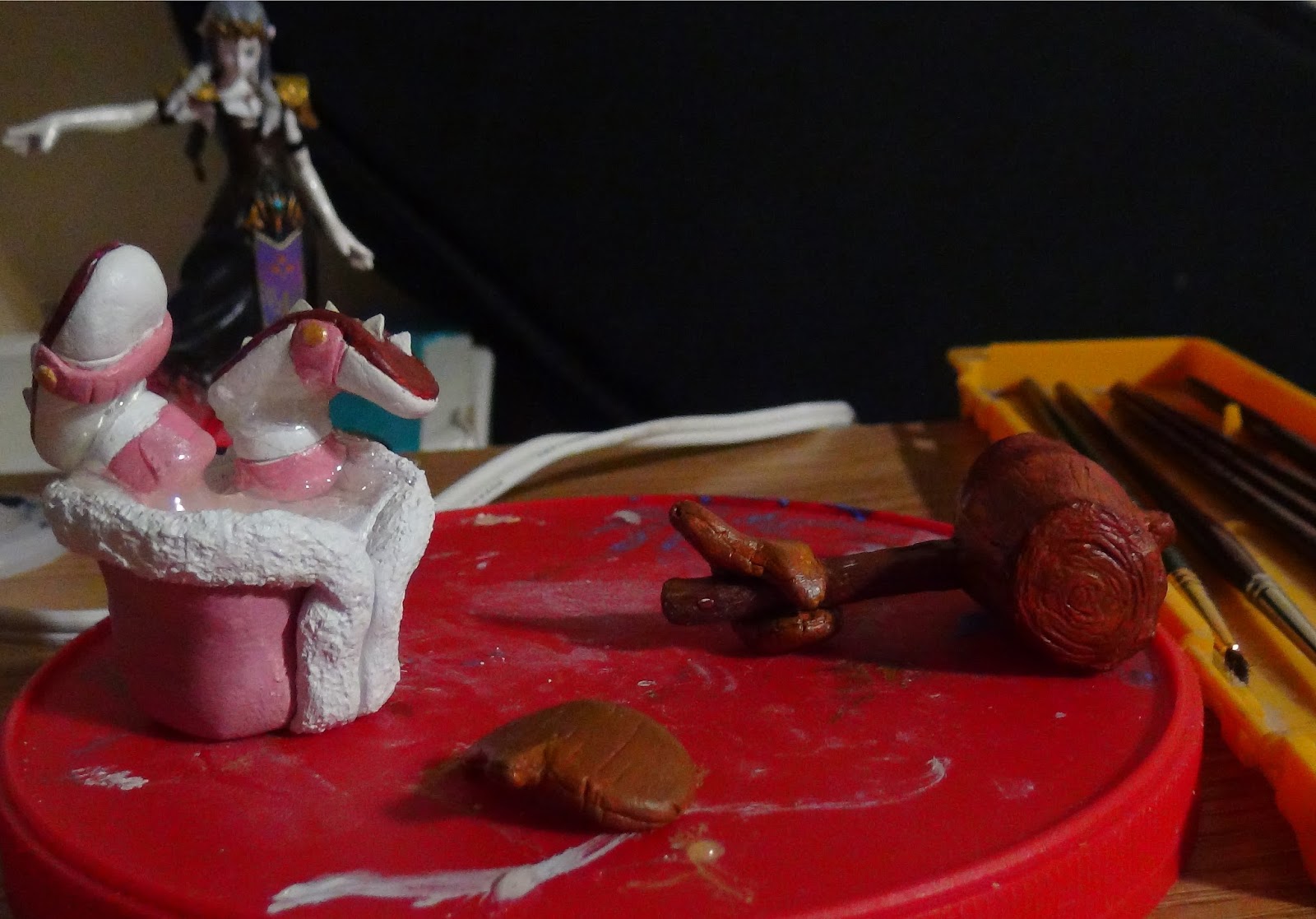 Since Popo was the most self-supporting character, I saved Nana for second when it came to fixing them to the base. I made all their parts at the same time, though, so that they'd look the same.

btw, massive shoutout to /r/amiibo for keeping me entertained lately

My next custom project is going to be BIG. Yeah, that's a hint... 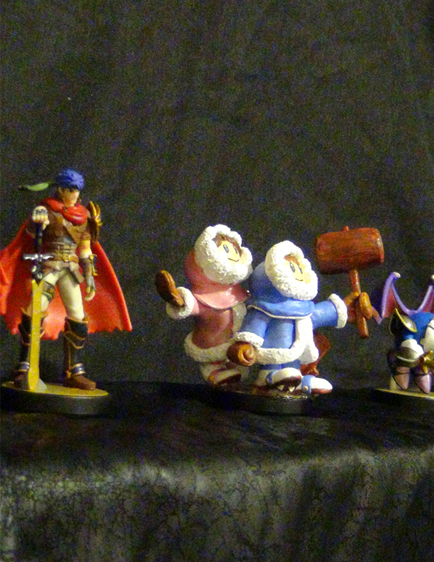 IF YOU LIKE THIS, CHECK OUT MY MEGA REVIEW OF SUPER SMASH BROTHERS 4! JUST CLICK HERE! I DID A BUNCH OF ILLUSTRATIONS!

Super Smash Bros. for 3DS and Wii U Mega Blog - WITH ILLUSTRATIONS!


Super Smash Bros. (hereafter SSB) is one of my favorite series ever. If you've ever read my blog, you know I do more than just review games... I give constructive feedback on how to make games better. That's what this is. Games I truly love tend to get the harshest feedback, since I want them to be so much better.

Just to clarify, I consider the 3DS version to be SSB4 and Wii U to be SSB5, the hypothetical next game in the series I will call SSB6. I base the six on a job listing that was posted to NAMCO for Super Smash Bros. 6, so we know hope that they’re working on it! 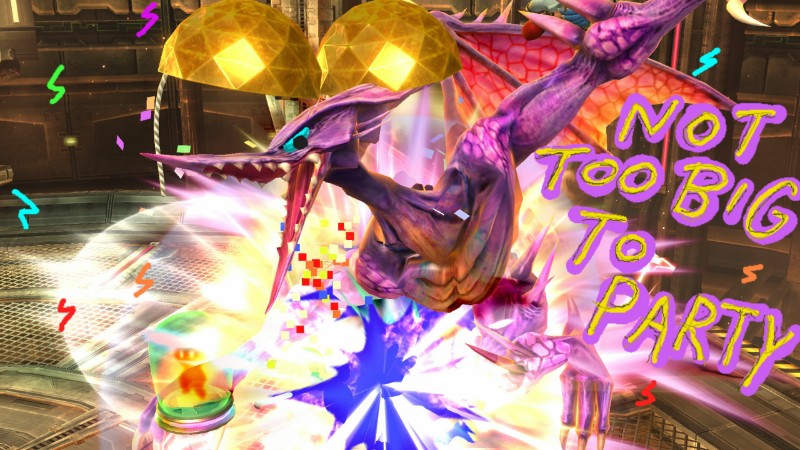 As Ridley warns, this blog post is BIG and contains a million image files! I set it behind a pagebreak so it doesn't lag you out. By the way, the screenshots are all ones I took in the game, the drawings and illustrations are all hand-done by me, and the photos were ones I took. The only image in this that I didn't make was the Ice Climbers moving gif.

Something all writers need to watch sometimes...

Flies in my Brain Web


Here are 10 random things that I have been giving my attention to lately:
1. My sweet, wonderful, old lady neighbor fell and broke her wrist and hip. I visited her in the hospital the other day. She’s OK, but hates being there.
2. Someone asked me if they could eat my sleeves.
3. I went to the Impractical Jokers liveshow. I had never seen the show, but a friend wanted people to go with and it sounded fun. It was.
4. Incubus’s new song, “Trust Fall” is incredible. My brain has been singing it constantly.
5. My muscles have noticeably gotten bigger from lifting weights since October. I drank muscle milk for the first time yesterday.
6. I was forced to watch a Madea movie for the first time. I did not enjoy it.
7. I recently finished off the last two of Skyrim’s DLC trophies. I can’t believe I’m still playing this game.
8. I’ve been rereading A Song of Ice and Fire. I’ve been listening to podcasts about theories and stuff. I’m obsessed.
9. I had a dream that my bank was trying to get my to invest in mummified dogs as assets.
10. Apparently, telemarketers don't like it when you use a robot voice: 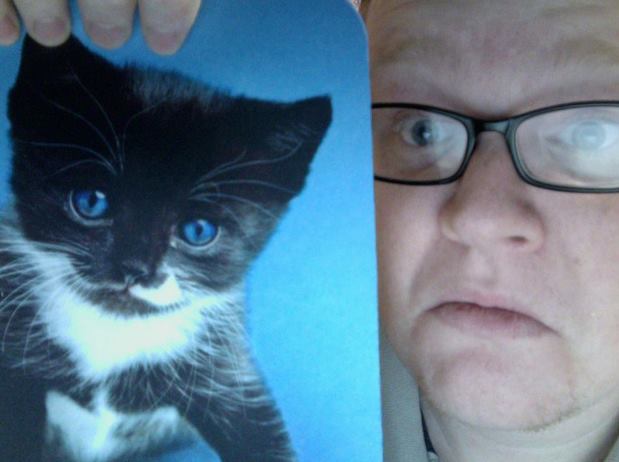 So, I ran to the store to grab a new mouse pad.  I was in a hurry and picked the first black one I could find to match my desk... but I got home and realized that this had been put back into its packaging backwards and now...

I'm keeping it.
Posted by oxyborb No comments: Links to this post

So, this was one of those Liebster Awards, but I already did one, so I’m just going to answer the ten questions that my nominator, Emily June Street (Twitter), wrote for her victims:
1) What was your dream career when you were a kid?
I wanted to build robots. Short Circuit was my favorite movie. I used to build little Johnny 5s out of Legos. Even when I grew older, I still loved to consume media like I, Robot and Battle Bots (which was a TV show pitting real robots people built in a fighting arena). I went for an English degree, but if an engineer came over and asked if I’d like to spend a day in his robotics lab, I would go without question.
2) What is one physical activity you want to do before you die?
I want to go skiing. I have never been. I almost went this month, but then everyone backed out on me.
3) What is your favorite trip or vacation you’ve ever done, and why?
When I was 10, my mother took me to Disney World in Florida. I know that isn’t as grand as some of the places I’ve gone, but I was ten and I ate Mickey Mouse-shaped waffles every morning and swam in the water-park every night. That might have been one of the best weeks of my life.
4) Do you dance?
Yes. I was a part of a show choir in HS, so I danced them. I like dancing, except at weddings. I guess that’s my one pet peeve. I think weddings are stupid and predictable, and the music is always awful. Maybe I’m just jaded for some odd reason…
5) Editing or drafting?
It’s all good to me.
6) Your favorite myth or fairy-tale and why?
Fairy tales and myths kind of bore me, so instead I’ll answer Jules Verne. Journey to the Center of the Earth, Twenty Thousand Leagues Under the Sea, and Around the World in Eighty Days were my favorite childhood stories, and they were the closest things I had to myths growing up.
7) Where (and when) did you grow up and how do you think it shaped you?
Belleville, IL. My shape came from two places: a theatre group and the local band scene. I used to perform as a singer/guitarist for a few bands (check it out). I wrote almost every song that I played during that time, and that is how I became interesting in writing/composition. One revelation I had was that I’m great at composing, and not just music, but art. I can see how small aspects form together to create big ones, which is why I’m trying to become a novelist. I think most people say that they have a great attention to detail, but I consider myself a big picture guy. I see a scope of details that will become a finished product.

My theatre background is what shaped my personality. I think I learned more social skills backstage than anywhere else. I did a group that wrote, practiced, and performed plays in a 24 hour period in a big festival of sorts. I might be getting back into that soon, actually. When I do that, I always direct.
8) You have $100 that you must spend on yourself by the end of the day. What do you buy?
A drawing pad and a set of Faber-Castell art pens, any remainder on coffee beans.
9) Pick any three objects or people to be stranded with you in a lost space ship.
Michael Phelps
A saddle
a gold medal strung to the end of a stick
OK, so that’s actually what to bring when stranded on an island… (but I love repeating that joke (I did not write it)).

Assuming I cannot pick objects that can send me home (teleporter, a satellite beacon for messages, etc.) and that I am not in immediate need of life support (such as food or air), I would pick… a loaded Kindle, a computer with Skyrim, Minecraft, and Microsoft Word installed (to get my mind off the ship), and a piano.
10) What’s your favorite piece of music and why?

Incubus is so much more than the few songs that have been on the radio. The song I picked is just like me… mellow, forward thinking, and weird. Also, I sometimes accidentally make it rain frogs.
11) Are you a pantser or a plotter?
Both, equally. I write a rough plot, and then allow my characters to do whatever they want. I don’t stick to my plotting. I often rewrite the plotting to accommodate for characters that decided to invent themselves along the way or spots where my leads took a wrong turn. The plotting is a mental activity, not a roadmap.
Thanks again to Emily June Street! She’s awesome, so go check out her blog!
Posted by oxyborb No comments: Links to this post