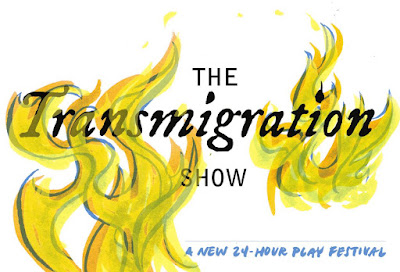 I directed a play the first weekend of November for a 24/hour new play festival, and it was awesome!

If you’ve never heard of a 24/h NPF, here’s a quick explanation: 6 directors, 6 writers, 6 teams (of 2-4) actors come together at a meeting at 8pm on Friday night. They are randomly divided up and assigned to each other. The writers stay up all night and write a 10-minute play. Then, the director and actors meet up early in the morning and begin to memorize and rehearse the plays. At 8pm Saturday, 6 ten-minute plays are performed together.
So, it’s new plays written, rehearsed, and performed within 24 hours.

I’m sort of a vet of these. I did them once or twice a year with a (now gone) group called Immediacy Theatre Project (ITP). When that company died out, I moved to Seattle for a few years, and many of them moved in different directions on the map as well. Others wanted to pursue other interests.

After a few years without ITP, a few of the old members began feeling the urge to get back into the game, and so a new theatre company, called PRIME, was born.

Their first show was the one I’m writing about, called The Transmigration Show. Transmigration basically means reincarnation, and our theme of the show was various karmic cycles.

I was a director, which means I was in charge of quite a few things: keeping us on schedule, making lists of needed props, firing up the actors when they get stressed, being the one to say “one more time” when we’d all rather not, knowing when to back off and let the actors clear their heads, interpreting the script and helping the actors understand their characters, run lines as needed, ready any technical needs, block out where the actors move on stage, enforce breaks as actual “breaks” rather than more script-reading or stress building, and being chief contact between stage management and actors during the day.

I’ve done acting and writing for these plays before, but I’ve found directing to be the most fun. I’m not the best memorizer of lines and I’m not a late-night person, so there’s that. Beyond that, I love getting to add artistic input from the director’s POV.
Directing is like being the one in charge of molding the diorama. You can challenge the actors to think differently about the characters. You can block [move characters] out how actions in the play occur. You’re in charge of nonverbals. Basically, the writer, the script, dictates what the actors say, but the director molds the intensity of the words, the movement of the bodies, the props and set pieces the actors interact with, and all the things the words don’t show.


If a line is said a certain way, it can change everything.

There was a moment during my play where one character says, “Hold my hand.” 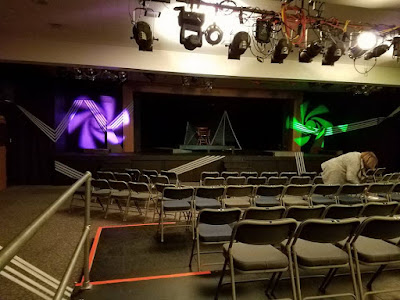 During our first read, she said the line childishly, as if she’s just a little girl wanting love. But, as a director, I molded the play into a battle between two characters for the compliance of the third, and so “Hold my hand” became “Hold my hand,” the my being said competitively, jealously, as a command, in spite of the rival hand holder.

I loved working with my team of writers, actors, show runners, and crew. They were sooooooo talented and wonderful. I had such a great time. We also had artists paint/photo/etc. and display their pieces. I think, as an aspiring author, nothing beats being surrounded by talented and passionate artists, all collaboratively creating great art.

Reminds me of this awesome quote:

"Life is sometimes hard. Things go wrong, in life and in love and in business and in friendship and in health and in all the other ways that life can go wrong. And when things get tough, this is what you should do.

Probably things will work out somehow, and eventually time will take the sting away, but that doesn't matter. Do what only you do best. Make good art."


I have finally gotten a new cell phone. I haven’t had one since leaving Seattle, mostly because I hate phones. But, I have one now, and I wanted to write a bit about that. I bought a Galaxy 7 Edge. It’s got this cool case that protects the screen and also can be used as a touchscreen through the hard case. It uses NFC for a cool “closed case” screen.

BTW, after years without, I’m pretty out of the loop about what good apps and phone games there are. I’m playing Pokémon Go, of course, but if you have recommendations please let me know!

One of the first things I did with my phone was prank my friends. With a brand-new number, not a single person would know who I was, so I used that to send text message pranks.

I said, “Stop playing, Jeff. I want to tell you about the ghost I saw in the attic. The white lady appeared again.”

I went on to tell a ghost story, leading up to the ghost saying the actual name of my friend, then me revealing the prank. I pranked another friend by telling him he was subscribed to premium updates from a fake organization, leading into the organization knowing things that he keeps in his apartment and where he was traveling to next, haha. People that know me irl know I’m mischievous like that, and my friends are quick to figure me out.

After posting my actual number to my friends on social media, someone [unknown] texted me asking me to play 20 Questions to try and figure out who they are. We had fun, but I didn’t get it right. It was someone from my college years who I lived next to in my dorms. Very cool person!

Something else I’ve been doing is toying with the voice command. When you say “OK Google” the phone listens to you and tries to do what you tell it. But sometimes it outsmarts me.

Me - *frantically lowering the volume and closing apps, trying to kill it*

Me - *No apps open, no browsers open... song is still playing when the volume goes up* "OK GOOGLE STAHP!"

Me - laughing crazily at being outsmarted by a phone

Me - Driving home thinking about how weird it is to give voice commands to a phone. Nothing works like using a keyboard and mouse, imo

Me - "OK Google, what are Voldemort's seven horcruxes, then?"

Google - "According to the Harry Potter wiki, there is the Tom Riddle diary, Tom Riddle's father's ring, Slytherin's necklace, the RavenClaw diadem, the Hufflepuff cup, the snake and finally Harry himself. Notice that nothing of Griffendor's was ever used." 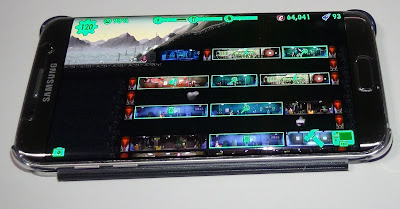 That’s all for now, but why not follow me on Twitter and then check out this blog post about a phone game I recently played [Fallout Shelter]?


I recently bought a phone, after a few years stretch of being without one. So, I’m playing catch up with all the games you’ve been playing for years. One of those is Fallout Shelter.

As of this writing, I have about 120 dwellers. After 100, there are no new rooms to unlock and the game seems to be thinning out in the scope of future accomplishments. So, I started thinking up ideas for new content that would expand the game’s life. 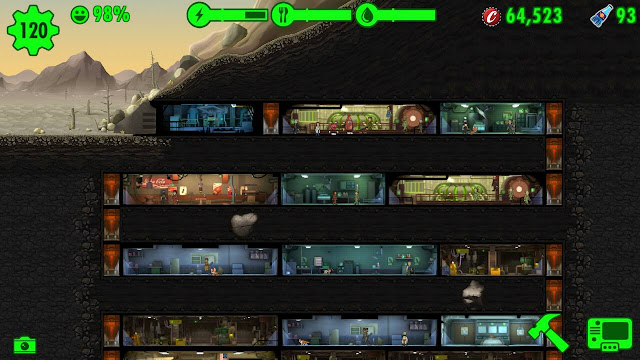 A new room could be a library. The purpose? To collect comic books and other magazines, also to store bobbleheads. Basically, once built, you will begin to find books and bobbleheads and other collectibles on your adventures into the wasteland. I imagine being able to do a “top 5 display” of each collectable type in the library, which would give you perks based on which comics you display. Like, “Grognac the Barbarian” might give you a “faster strength training” perk. Upgrade the room for more “display” slots.

A robotics room would be another great addition. For every “block” of this room, you can build 1 robot (or turret that you can place somewhere, such as the vault doors). The robots would be security, fire-safety, joke-tellers, mission-goers, or simple workers. They could have stats based on the parts you collect out in the wasteland or craft from junk. Upgrade the room to craft “rare” and “legendary” parts.

Weird how we have a Fallout game without chems! This can be corrected with a new room. Chems would obviously give your dwellers a boost in the heat of battle. Also, the chem room is a great place to build grenades and other traps (more on this later)! Upgrade the room for “rare” and “legendary” chems to craft.

A new friendly group to enter your vault could be traveling caravans. Build the new storefront room, and merchants will autopopulate the room every once and a while. Sell off junk/weapons/armor to them for better (or worse) prices. Buy specific junk or weapons or design documents from them for high prices. Upgrade the room for better prices and better merchant inventories.

A room designed to fight off incoming swarms of baddies. Basically, this room would provide your dwellers with a boost to defense. Also, dwellers in the room “collect” attract tokens like radio rooms attract new dwellers, and when used, attract tokens initiate specific types of attacks from raiders, ghouls, or monsters. Upgrade the room for better defense and more token storage.

With all these new ideas for rooms, one thing is certain: We will need better storage. Half my vault feels like it’s filled with storage rooms. I want a new room, like the Super Reactor or Nuka Bottler, which holds waaaaay more than the lower-end rooms for a higher price. A super storage room would allow me to make room in my vault for a bunch of new high-end rooms and also give me more space to store bobbleheads, comics, automatron parts, chems, and any other future DLC that comes my way. It doesn’t even have to be a new room; it can just be several new levels of upgrades for my old storage rooms.

Thanks for reading. Please follow me on twitter and hit the +1 button. It helps me out! Leave a comment telling me your own ideas for rooms.